Twins Ready to Make Some Moves 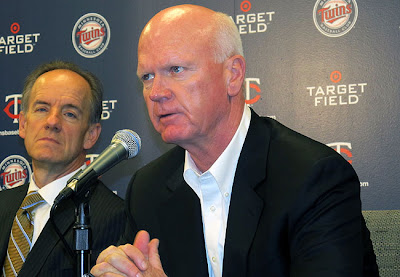 Twitter and the Blogosphere broke with the news today that the Twins had acquired Matt Rizzotti from the Phillies for "cash considerations". This move is in lieu of the minor leagues being one first baseman short now that Chris Parmelee is likely to break camp with the Twins due to his inspired play that's carried over since late last year.
The bigger news however, is what's to come.
At a press conference after the acquisition of Rizzotti, with reporters peppering Terry Ryan with questions about their latest acquisition, Ryan made a bold assertion: "When a team has holes, we will do anything in our power to help fill them. This isn't only true when it comes to minor league depth."
This statement has been leading to wild speculation that the Twins might look to acquire middle infield help, bench depth, one or two starting pitchers, and some veteran arms for the bullpen.
While this is a major breakthrough for the Twins front office -- that a player who can fill a needed position can be acquired for cash considerations -- some sources are criticizing the Twins for not coming to this realization earlier. Other players such as Edwin Jackson, Mark Buehrle, Todd Coffey and even Nick Punto could have been acquired for "cash considerations" (sometimes known as free agency) earlier in the offseason.
When questioned about their tendency to not seek out players for cash in recent history, Ryan countered: "We've been exploring all the normal channels for acquiring players. All options such as waivers, the Rule 5 Draft, etc. have been utilized. Now that we see the simplicity of a cash acquisition, perhaps that could change our stance going forward, but let's take one step at a time."
While the front office won't readily admit to being amendable to opening up the checkbook, word out of the other side of Fort Myers is that Twins scouts and personnel have been loitering around the Red Sox minor league fields with calculators and wads of one dollar bills, but that most of their players won't go near them without their agents present. The Twins front office has declined to comment on this.
Posted by Topper at 5:19 PM 1 comment: 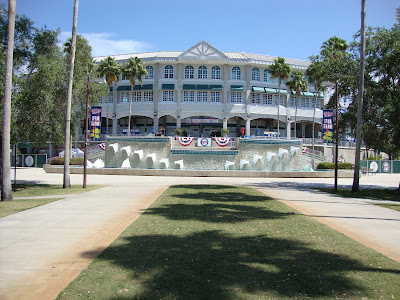 Well, nothing better than Spring Training to get me back here to write something.
Despite arriving in Florida on Wednesday in time to head straight from the airport to catch the game against the Phillies, I decided to head down to Naples, get some Cuban food, and just relax on the beach instead.
Thursday, however, I got up early and went to check out camp first thing. I got there at 9am, before the players had even hit the field. (Overhearing Gene Glynn & Tom Brunansky chatting later it sounds like there was a nutrition meeting that morning and it set their schedules back a bit.)
Since the Twins were out of town playing the Pirates, my day was just spent bouncing around from field to field watching exercises, fielding practice and BP. Not the same as a game of course, but for someone deprived of baseball for months on end it was like a dream come true. And with the team out on the road it's always nice to have the sports complex almost completely to yourself.
My recap probably is best served as just an amalgamation of bits and pieces -- it's really the only way to describe Spring Training -- for anyone who hasn't been there in person it's almost a sensation overload and it's just enough to keep a few coherent thoughts in order: 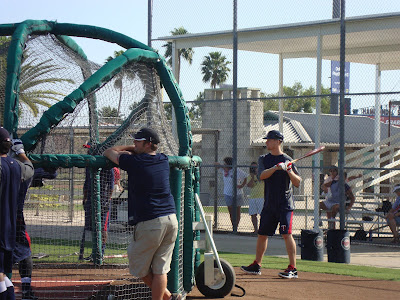 - The first thing that struck me was when I was watching Morneau take BP over on the main field near the Stadium. He was taking cuts in the same group as Willingham and Span. But the thing that I noticed was that he was wearing a batting helmet in BP. Not a huge surprise, I suppose, but considering the guys on the big league side of things tend to just wear hats in the cage, it struck me as a little odd. Down in the minors everyone was wearing helmets, but it seems like once you're in the bigs you get a little swagger and don't want to make your head any sweatier in the Florida sun than necessary. But fragility supersedes style. Morneau did have some powerful shots in his BP session, drilling a few back-to-back shots over the right field fence in one round and then in the next hitting a homerun on a rope, pure line drive (also to right). Willingham had as much pop as advertised as well, and not just when he was pulling the ball -- it seemed like for awhile he was trying to drive it and he ended up launching one way over the 405 ft. centerfield fence and high off the green backboard beyond. Morneau, Span, Hendricks, Willingham, and Carroll all took time to sign some autographs along the rail after their workout. Morneau didn't seem down, tired, lackluster or anything. He was laughing, joking, and making plenty of fun small talk with fans and if anything it was just good to see him in good spirits.
- In complete contrast with Morneau was Nishioka. Relinquished to the backfields but still followed around by Ryo, Nishi just didn't look happy to be there at all. He kept to himself, he went through his drills, and as soon as fielding was over he went straight to the enclosed batting cages to take some swings instead of staying on the field with the rest of the team. I overheard Bruno say something to Gene Glynn about Nishi going inside and I couldn't tell if there was any subtext to it or not. Best not to read into it too much I suppose, but hard not to. 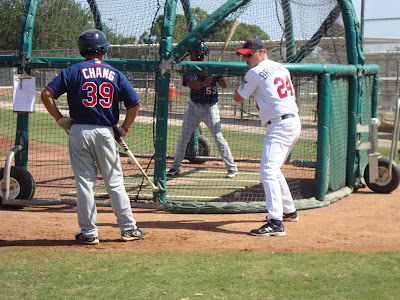 - Watching Bruno run BP was great. He really has a great way with the players and they seemed to listen to him and actually respond to his instruction. In one instance, he was working with Aaron Bates and he stood in front of him, positioned his bat, adjusted Bates's hands, and gave him some direction on driving the ball. The next time he stepped into the cage he checked his hands and just drilled the next pitch. He spent time with everyone on that practice field, talking in Rene Rivera's ear while he was hitting, demonstrating adjustments for Ray Chang in his stance, etc. Later, Matt Carson was taking some hacks with Rene Tosoni and Joe Benson and Bruno was actually throwing the BP session. Carson took a strong swing at a pitch well over the far side of the plate and Bruno tsked him and said "Just because it's out there doesn't mean you need to be aggressive... stay back, wait for your pitch. Sit on the fastball in or wait for that hanging slider." Carson took the next pitch which Bruno tossed a little high and then Bruno hung one right over the heart of the plate and Carson belted it deep to the warning track with nodding approval from Bruno. 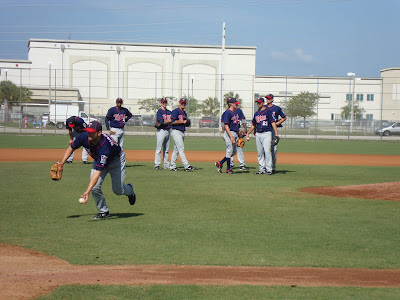 - There was a lot of PFP going on today as always. There were 3 fields running, one of which I didn't spend much time at was the lower levels of the minors. There was one group of AAA pitchers working with Glynn, Bruno and Cuellar while another group that seemed like a mix of AAA and AA worked with Cliburn, Smith, and Hernandez. Wimmers was in Cliburn's group and seemed very at ease, which is a good sign that hopefully he's in for a good season. Steve Hirschfeld was also in that group and above everyone else he stuck out as a TALL pitcher, with long arms and a big frame. His minor league success isn't fluky it seems and he's definitely someone to keep an eye on as a future major leaguer. In the AAA group there were a ton of former non-roster invitees (PJ Walters, Brendan Wise, Daryl Thompson, etc.) along with some familiar faces like Scott Diamond and Jeff Manship. One guy in particular it was pretty great to see on the field: Kyle Gibson. While the other pitchers would throw a live ball in the drills he just mimed the action, but still went through the routines. Hopefully he can make it back to throwing soon. Gibson's wife was there as well, along with their adorable Alaskan Malamute (who must have been baking in the sun). Their puppy got a lot of attention from the players as they ran to the field. I think I heard Tyler Robertson saying something about how he'd be their mascot for later in the game and a bunch of the other guys chuckled.
- Pedro Florimon was fun to watch as he took practice. He was pretty smooth with the glove in the field and has a decent size that I imagine could generate some line drive power if he makes more contact with the bat. He's also got a very easy going nature, very jovial. Glynn told him he'd be playing shortstop in the game today and he smiled and shook his head and said "No, no, segundo," which drew some laughs. 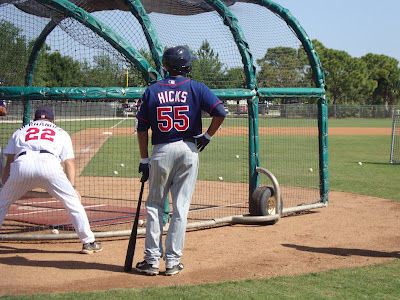 - Smith threw some BP to a group that included Aaron Hicks, Marc Dolenc, Evan Bigley and Darin Mastroianni. He went through a few rounds and then began going through situations with them, telling them to drive one shot to left, followed by center, followed by right. If someone could get all three to the right direction he'd give them a bonus situation. Hicks really seemed to struggle with directional hitting and wasn't getting good cuts. Mastroianni actually nailed all 3 and so Smith called out a bonus situation for him: "Bases loaded, 2 outs, take a shot" and Mastroianni proceeded to lay down a bunt and sprinted out of the batting cage which seemed to amuse everyone on the field. 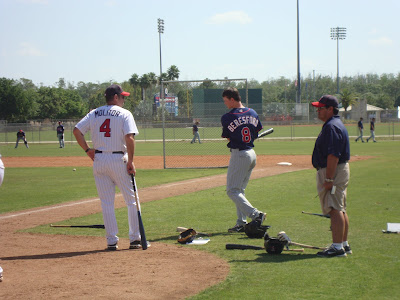 - As great as it was watching Bruno teaching the AAA players about their hitting, it was fun to watch Paul Molitor and Tom Kelly strolling between the 3 active fields and jumping in to offer pieces of advice, or sitting down on a bench or a folding chair and taking in some of the practice. When everyone finally broke to go in for lunch before their minor league games that afternoon, I wandered by the little half field near the clubhouse and saw Molitor hitting grounders to Mastroianni -- who for some reason was getting reps at second base -- to practice ranging to his left and ranging to his right while Molitor would shout out advice between each grounder. Eventually TK and James Beresford wandered by as well and Beresford asked if he could join, so TK ended up shooting the grounders and Molitor stood by the two of them and gave them some pointers.
That's about all I can remember from my sensory overload today. I'm going to the Twins/Red Sox game Friday and I'll also catch the game against the Pirates on Saturday. If anyone else is going to some of the games feel free to shoot me an e-mail or leave a comment and maybe I'll see you there!
Posted by Topper at 12:18 AM No comments: